This is the photo finish at the end of one of the short races this evening. Lovely wind, clear blue sky and a perfect end to workday. One of the current RYA L1&2 students joined us earlier and sailed on a Comet Trio with her daughters.
If you’re a club member and would like to join us on a Thursday please get in touch with Simon or Steve. 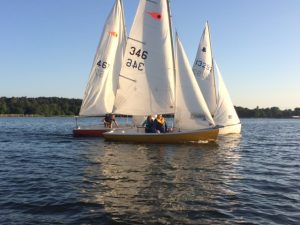 A small Cody fleet sailed from Tudor SC today; we had light winds to begin with, picking up at the end of the afternoon. We landed at the western tip of Hayling Island, on the beach next to the Ferry Boat Inn for a cheeky beer. Thanks to Tudor SC for use of their slipway and club house.

Lovely day today, sailing from Stokes’ Bay to Southsea. Favourable winds and tide, blue sky and ice-cream on the beach… what’s not to like?

In addition to our usual camp at Autumn camp at Cobnor House, this year we organised a camp for the May Day Bank Holiday weekend. The weather was excellent, sunny every day with clear blue sky from horizon to horizon meaning there was sure to be a sea breeze even though the forecasted wind was only an Easterly F1-2. Each day we waited for the sea breeze to start, which gave a cooling and refreshing F3 Southerly breeze

across the harbour. Given the tide, the best place to go was to East Head, HISC and then home, on one day via Bosham for ice creams. We teamed up with First Sunday Sailing Group (FSSG) and enjoyed fleet cruising with them on both Saturday and Sunday. On Monday the sea breeze took longer to arrive than on the other days, and by noon we had solid wind. We had time to visit East Head for lunch, a chat and a snooze in the sun. Furthermore, we were joined in Chichester Harbour by the Cody Sailing Club yachts who sailed from Portsmouth and spent the night in Itchenor.

We managed to do joint cruises over the long weekend with the FSSG to East head. We have invited them to join us at Poole camp and the next Bosham camp. A thoroughly good time was had in the sunshine and we look forward to meeting up with FSSG again.

We set off from Stokes Bay in lovely sunshine and it was warm and very pleasant and we made good progress at first. The wind was light and we had already decided to miss Wootton Creek and go to Ryde sands for an ice cream. This new destination made sense given the tide and the wind. In mid-Solent the wind died away to almost nothing and for a couple of hours or so we got nowhere. Newcomers to dinghy sailing sometimes wonder if they will get sick and the fear of this can put them off. I have always said to them you cannot get sick in a dinghy because the motion does not allow it. Slopping around in the middle of the Solent for two hours though made several of feel quite queasy, so for the first time I realised that it seems that dinghy sailing can make one queasy. Eventually, we turned back before reaching Ryde and we had to paddle part of the way until a most perfect breeze sprung up making for a great reach back to Stokes Bay. The conditions were now so good that we went out again for half an hour just for the fun of it. On our return the tide was very low and it was a bit of a struggle to get the boats back onto the road. The rusting piece of metal sticking out of the water that is just off the beach was visible and made us wonder how many times we have sailed over it and missed it – so far! This was an interesting and fun day and conditions eventually became perfect.

When the programme was put together the three-day two-night cruise was planned for a trip to Chichester Marina with the next night being spent in Island Harbour, which is up the Medina River. However, in the end the two yachts went to Itchenor and then Bucklers Hard, because of lack of available berths due to the glorious forecast and the bank holiday. The high pressure combined with neap tides also made access to Island Harbour unwise.

Saturday morning saw the now standard routine of coffee and cake before both boats slipped from Portsmouth. One yacht sailed a direct route to Chichester Harbour whilst the other played with their asymmetric in the light breezes. With the harbour being so busy plans to link up with those camping at Cobnor was abandoned and the two boats made straight for the Itchenor to secure a buoy for overnight. Whilst on the buoys, conversations were had with the passing dinghies as they harnessed the light wind to challenge the tide up towards Dell Quay.

Meanwhile, on the yachts the evening started with refreshments in the glorious sunshine of chilled cider or Pimms – the only challenge for those sitting on the bathing platform of was to move quickly when the occasional big wash came through.

Sunday morning saw glorious sunshine and a relaxed start. A quick phone call to Island Harbour confirmed that with the high pressure they strongly advised us not to come because it was unlikely that we would have enough water over the lock to exit on the Monday. Some hasty phone calls did not identify many places to go but Bucklers Hard marina said they had space for both boats if we did not mind rafting on the fuel pontoon.

As the boats left the Itchenor buoys mid-morning there was not much wind but once out of the harbour there was enough wind for both boats to do some sailing. After a pleasant motor up the Beaulieu River both boats successfully tied up in time for tea and cake followed by some pre-dinner drinks.

With a change from the norm of eating out, and with the nice weather, a quick walk to the BBQing area, saw the men slaving over their hot stoves whilst salads and plates were put on the available tables. As the temperature cooled all returned to Emelita for dessert and cheeses suitably washed down with coffee, port, wine etc.

Monday again provided for a relaxed start
in some glorious sunshine. Most took the opportunity for a quick walk ashore and ice creams before departure. Who knew there was a little church next door to the Master Builders pub and in the ground floor of one of the cottages? As both boats exited the river one behind the other, following a motor down, it was time to become a sailing boat again. Following a VHF conversation off Cowes, it was agreed for a lunch time stop in a busy Osbourne Bay. There was too much swell for the boats to raft alongside each other but we anchored close enoughfor some goading between crews which resulted in them both going for a very short dip!

It is not certain who got out the fastest after jumping in! – but they both lied saying it was “lovely”. (Note wet suits and dry suits were not included).

Following a leisurely lunch there was still enough wind for a gentle sail back towards Gilkicker and onwards
into Portsmouth. Following more tea and cake, boats were tidied up and the rally was once more over.

The weather gods helped make it a splendid weekend that was enjoyed by all. Watch out for the Autumn calling notice when this time the boats will head towards Yarmouth / Lymington.

Cody Sailing Club joined in with the RYA’s nationwide Push the Boat Out event with a good ol’ fashioned Beach Day at Stokes Bay. The plan for the day was to greet and welcome potential new members, to offer them a taster sail and to talk to them about the club. In preparation for this some efforts had been made to promote the event, via our own website and (with the support of the RYA) via press releases to newspapers along the south coast.

A slightly misty start developed into an almost perfect day – Sunny with a fresh, moderate F4 south-easterly. A small fleet of dinghies (2 club Trios, 2 members’ Trios, a Vision, a GP14 and a National 18) gathered at the top of the slip. These were joined around lunchtime by two cruisers, anchored a little off-shore.

As boats were being rigged we received a visit from the Coast Guard, who having seen the flags flying atop the tall National 18 mast (see right), pulled in to the car park to see what was happening. After passing the time of day, and with encouraging words they left us to it.

With no feel for how many potential newcomers we would be hosting there was no sense of urgency in taking to the water. The result was a rather more ‘chilled’ beach day than normal, with opportunity being taken for teas, coffees, a sit down and a bit of a chinwag. It soon became clear that we were not going to be inundated with enquiries, but with some interest shown by a few people who had been tipped-off about the event, a sailing plan started to materialise. 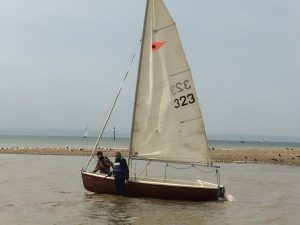 A pleasant morning was spent on the beach and the water, with some taster sails being arranged for those wanting them, and a chance to blow away a few cobwebs for those of us who hadn’t been on the water for a while (myself included!). A couple of enterprising dinghy sailors invited themselves onto the cruisers for a cheeky drink.

As the afternoon drew on, the wind dropped as the high tide approached. We brought the last of the boats back up the beach and began the pack-up. By the time we had put the boats away the wind had died completely and, with the cafe closed, we almost had the car-park to ourselves for a lovely calm summers evening. And, after many years of sailing from Stokes Bay, we have found a chip-shop which, whilst not quite within walking distance, is close enough for a quick trip to pick up a chip supper to be eaten on the beach.

Reflecting on very pleasant day’s sailing, it is perhaps a little disappointing that we didn’t generate more interest from potential new members – particularly having made efforts to promote the event. But we were able to welcome some people who had come along on the basis of word-of-mouth recommendation. Hopefully this personal touch maximises the chances that these people will decide to get further involved with the club.