Cody Sailing Club are camping in Chichester Harbour this weekend.   With the high pressure building the forecast was for no wind but this afternoon we have had a lovely couple of hours on the water in really gentle winds.  If you just decide to go for it then sometimes it pays.

Cody are just back from their annual summer camp which this year was based in Salcombe harbour.  Last Thursday saw us take to the water early.  Alarms were set for 0530 so that we were on the water by 0600.  This is not the normal hour to set out but the early start was made worthwhile on two counts.  One the beautiful sunrise as we set off from Frogmore creek.  The other was the dedication of a couple of other campers who also got up early to make us tea and bacon sandwiches for breakfast.  Light early morning winds meant the catering team needed to be flexible and cooked us our splendid spread at North Sands. After being fed the winds built so we made our planned destination of Hope Cove, retuning after having had coffee and ice cream.  Having been to 19 Cody camps this trip is up there for providing positive memories.

Sent from Yahoo Mail on Android 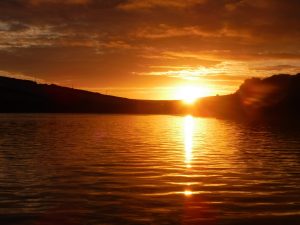 After a poor weather start to the summer camp the weather has dramatically improved. Good sailing, good levels of relaxing on sandy beaches, great company.