The Saturday of the Bank Holiday Weekend had a superb wind forecast, F3-4 from the SE, good sun and warm temperatures. The DCA were in the middle of their two week camp at Cobnor, and Simon had circulated an invitation from Tudor SC to join them on their outing to Priory Bay.
Putting all these together created a passage plan that we knew would be ambitious.
Starting from a slightly chilly Cobnor at 07:15 we took the ebb with a lovely F3 spinnaker run to reach out of the harbour, past West Pole and picked up the ebb, deliberately sailing offshore on a spinnaker broad reach to maximise the help towards Langstone. The visibility was hazy, and when roughly the entrance was abeam we gybed onto the starboard broad reach that took us to Langstone Fairway and into Langstone Harbour.
The tide was ebbing, and by staying close to the eastern shore we took a series of back-eddies and anchored at the pub and cafe. We arrived at 09:30. Hot drinks at the cafe, and a change out of the drysuits were welcome.
We contacted Simon at 10:15 and he confirmed that the white sails we observed up the harbour were Tudor setting out. As their first boat passed us we joined in for the close reach to Priory Bay. Tudor sail with safety boats, and it seemed that any boat was welcome, including a Laser, several Wayfarers, Simon in his Trio, a Lightning, an RS Vision and so on. The safety boats made sure that crossing the main big ship channel was safe, and herded us to the beach.
I’ve not been to Priory Bay before, and it’s lovely, if lacking basic amenities. The gently shelving sandy beach is predictable, and has good holding for the anchor. We stayed with members of Tudor and Simon, Adri and Anne until 13:30, when we took to the water to sail the 8 miles back to Chichester Entrance. The visibility was poor with haze, so we used the compass to guide us, past anchored large ships, over the big ship channel and eventually we picked out the big hotel on Hayling seafront which illuminated briefly through the patchy haze to confirm our pilotage. At the deep water channel we hoisted the spinnaker to get across the channel quickly, then continued in light and patchy winds to the harbour entrance. The wind picked up a little and by 17:00 we were in the pub at Bosham having taken the whole flood tide to our advantage. The short sail back to Cobnor completed the 33 mile sail.
Simon reported that Tudor SC had very light winds on the way back. Some boats had a tow for a bit. They got back to Tudor at 17:15 pm having left about 14:00.
Our thanks to Tudor SC for inviting us to tag along, and to Simon for organising the Cody SC bit of the sailing. 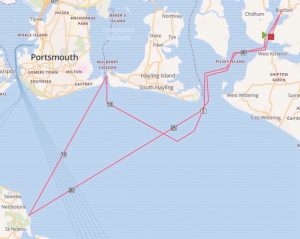 Hello Cody sailors, this is an advanced calling notice for November 2019…(it seems a bit odd sending this email today, as we head into a hot and sunny bank holiday weekend, but we need to plan ahead!)
On Saturday the 23rd November, the plan is for a three-part day/evening activity:
1) Day sail in Chichester Harbour 2) Evening meal in Chichester 3) Southdowns Planetarium (SDP)
Participation can be any combination of the above, eg if you don’t want to day sail, but would like to join the evening meal and SDP event that’s fine (or any combination that works for you).
The critical item right now is getting booked for the planetarium event: this is a one hour show starting at 1930, explaining the Northern Lights. Bookings need to be made directly with the SDP (website link below). Tickets are £7 (adults), £5 children (6-15).
www.southdowns.org.uk
There are approximately 90 seats in the planetarium, so book now to avoid disappointment. (I have already booked my ticket.)
Information for the day has been posted on the events section of the Cody website; this will be edited/updated as more details become available. In the meantime, please me know which parts of the day you are interested in, eg all three activity, day sail only etc.
Enjoy the bank holiday weekend, and hopefully see you soon.

The forecast predicted a lovely sunny day and SW F4 before the rain this evening. However, we woke to poor visibility, an Easterly gusting F5 and drizzle and rain and fog.
We held our last morning gathering, and a few went sailing, while wet tents and wet boats were packed up.
It’s sort of the end of camp, despite it planned to run until Sunday. The forecast of torrential rain and gale force winds means that there won’t be sailing on Friday or Saturday, so many campers left for home today.

Again filed under the heading “what Cody SC get up to when the tide is out”, the long awaited return of the on-field games. Three legged races, egg and spoon, assault course and so on. This year a creative contest to parade the best Greek Chariot will be long remembered. Based on a road base, many astonishing interpretations were made in 15 minutes.
The Chicken Run results were announced at the mass BBQ, with the two most accurate boats crossing the finish line -1 and +1 second of their target time.
Lovely evening chat around the camp fires completed a busy day, the last evening that we expect to be able to sit out; the early signs of the oncoming storm scraped Mares Tails across the vivid pink sunset.

The annual “Chicken Run” is not a race, in that there is not speed element to it – and it does have arcane and challenging rules nevertheless. The objective is easy to describe – be at the finish line closest to the time you’re given. But having passed a particular mark, one may not backtrack and must get ever closer to the finish. The results will be later, and apparently we are all within 20 seconds of our given time.
It was also a lovely day for sailing, F4-5 in the Helford Passage, bright sunshine and warm sea. 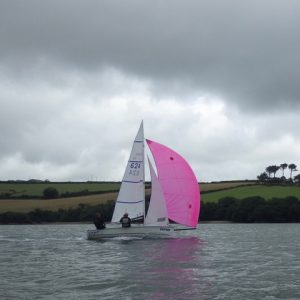 F6 for certain today, so we sailed from the beach in the local area. There was paddling to Gweek, sailing to Gweek, and early morning paddling as well. There is a tale of a Sport14 spinnaker being stuck while hoisted, and trapezing and planing.

While the F6 in the forecast did not happen, the promise chilled our ambition to sail to Coverack. The fleet played in the estuary in gusty conditions which rarely held steady. Some trapeze and spinnaker action added interest. Showers periodically dampened the tents. The fourth night paddle in a row found good phosphorescence.

With the wind now firmly from the SW, Maenporth was the destination for eight boats. The run down the passage became a good spinnaker broad reach / reach with a short beat onto the sand. Comparatively with other years the beach was quiet. The beach cafe had suffered a recent fire, and their substitute trailer provided great beach food. The beat back was lively and one capsize in the jaws of the Helford Passage proved the interesting wind. We arrived well after low tide and moved the boats off the beach in anticipation of tonight’s spring tide and F6.

The wind direction forecast for today made St Mawes an objective for ten dinghies. We left at 11am and took 2.5 hours to get there in a gentle F3 from the SE. It was St Mawes’ Regatta and we watched the start of the yacht races including the Falmouth Working Boats and other classes, while enjoying lunch. The return journey was slower as the wind became lighter, and we were carried by the Spring tide through the Helford Passage.

Busiest day on camp so far; Pirates Breakfast saw the Pirates (younger children) dressed up and ferried to a distant shore for breakfast, then joined by youth and others in canoes for the annual water fight. A 2L PET Water Rocket competition answered the question “what does Cody SC do when the tide is out?” A delightful snoozy afternoon while the tide was fully out, then a sail in zephyrs to Polwheverel and back with some unnecessary and superb spinnaker reaching to end the session. Music on camp to complete the day.